This is evidence was written and submitted to help inform the UK Government’s research into upcoming mental health policy.

A study by Schomeris et al. (2017) found that employers might stigmatise mental health sufferers partly due to a lack of knowledge about how mental illness impacts an employee’s work and future employment capabilities. For example, employers struggle to find answers to the following questions:

In the absence of some, or all, of this information, employers may act in a discriminatory way due to concern about the overall cohesion of their team and the success of the company. Additionally, a manager might seek to be ‘fair’ to other employees when mental illness sufferers take time off work. Lacking knowledge, they might make erroneous judgements about the legitimacy and severity of the mental illness. In order to ensure team cohesion, managers might unconsciously discriminate and/or fail to address stigmatisation and discrimination in the work place.

Solution: close knowledge gaps whilst embedding a more positive cultural view of mental illness
By closing the gaps in knowledge above we might reduce discriminatory or unfair decisions against mental health sufferers. Government could make this process mandatory for businesses with consistently high levels of mental health issues and strongly promoted elsewhere. Cultural factors could be addressed through a social marketing campaign detailed later in this document. It is important that the two interventions work at the same time to include employers in a larger social and cultural effort to understand and address mental illness more effectively.

Solution: non-mandatory and flexible part-time work
A solution has been trailed in Sweden and Finland whereby people suffering from mental health problems are given the option to come to work part time or temporarily, for example one afternoon a week or more, with no pressure to resume full time work. This is unstructured and non-mandatory work is unlike the current system used in Britain which is more rigid and often set by the employers or based on a GP’s decision.

2. Change the current use of clinical language to describe mental health issues.
A study by Hipes et al, (2015) into stigma and the labour market tested the impact of mental illness labels on labour market discrimination. Results showed significant discrimination against applicants for jobs who declared mental illness using current clinical language despite these applicants having strong credentials.

This suggests that the current use of language might contribute to discrimination. Mental illness terms are often used as insults slang terms or negative stereotypes. This leads to erroneous ideas or diminished expectations of applicants by some employers. Without a wider context of an applicants’ personality, some employers defer to their personal and cultural biases. The study showed discrimination reduced with greater personal with the applicant, for example face to face. This personal contact could be encouraged in the case of applicants that state they have mental health issues.

Negative or incorrect stereotypes are still perpetuated in the media as demonstrated by the BBC front page during a recent mental health story that reached front page of the BBC News website. The main article is followed with a second article called “Would you go sick for mental health?” This type of headline reinforces uncertainty by framing taking time off work for mental health is a question, rather than a legitimate and sensible action to take (This author noted that this headline was removed by the BBC editor later in the day).

Additionally, the use of the word mental is repeated four times despite this having negative connotations for many (Alternative words used could have been psychological or emotional well being). The image is misleading as it suggests that mental health has a specific ‘sad’ look when many people hide their emotions. Several unhelpful stereotypes are being re-enforced here. 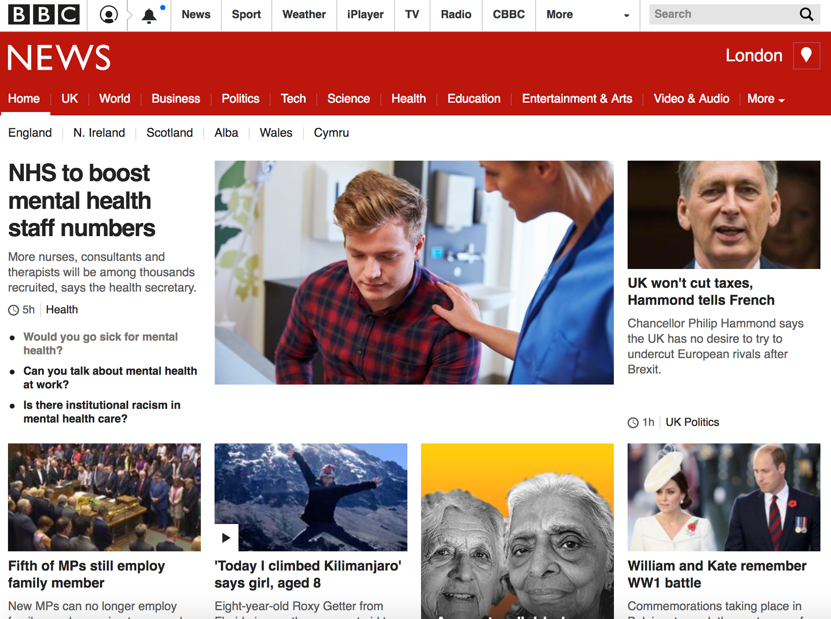 Currently sick notes for employers provide a large area for GPs to write a reason that a person is unfit for work. Whilst this is optional for some employers, the design of this note promotes and encourages GPs to provide details. In some cases, employers might ask employees for GPs to provide details on the illness in order to authorise time off work, even if this not required by law or company policy.

By changing the design of sick note to include and simple option that states that the person has a serious condition in addition to the unfit for work check box, this would satisfy employers and retain privacy for mental health sufferers. This makes it more likely that those who are mentally ill will seek to take necessary time off work.  Below is a mock up below of the possible redesigned sick note with the added option of “Condition is severe enough to require immediate cessation of work until date shown below” currently not present on sick note design.

4. Create a social marketing campaign that takes the nation’s mental health pulse by asking ‘How are you?”

This would be an annual campaign to help create a cultural shift on mental illness through a major mixed media event where the nation is invited to take part in an online questionnaire into their well-being. This would be designed with a psychometric methodology to ensure the questions were not invasive whilst still gathering valuable data.

The anonymous questionnaire would not focus on terms like mental illness but use terms alternative language previously discussed. The casual nature of the question ‘How are you?’ is deliberately abstract to encourage wider participation (Recent campaigns in London and by the BBC have been called “Are you ok?” which is more direct and assumes that some might not be ok, potentially limiting participation).

The campaign would go beyond this single outcome as many important cultural barriers could be addressed at the same time through an ongoing social marketing and public relations campaign. Television, radio and online programming could be used to:

An annual televised ‘How are you?’ media event could also be a fund-raising campaign like Comic Relief to pay for much needed outreach and first responder efforts to reach people with mental health problems. This campaign is likely to get significant support from the music industry which has been impacted by a series of suicides and overdoses.

Subsequent “How are you?’ campaign and media events would publish the data learned from the previous years and discuss how the nation is dealing with the issues better. Therefore, each year the campaign would improve and reach more people with more meaningful and useful guidance.